Solidarity Ukraine: our action over the last 6 months

Six months ago, few days after the first Russian offensive in Ukraine, Fondation de France lauched a solidarity appeal to help the vulnerable population affected by the conflict. To date, nearly 15 million were collected thanks to generous donors. This surge of solidarity has enabled Fondation de France to identify and support some fifty initiatives, with a dual objective: to provide emergency aid while ensuring that its action is sustainable!

The actions supported take place above all in Ukraine, where the needs are the most important, but also in neighboring countries (Moldova, Romania, Poland). These actions mainly focus on humanitarian aid and the issue of human rights.

The humanitarian issue remains the priority

Dealing with a conflict that is getting bogged down, humanitarian issues remain the priority. This is why Fondation de France supports the IMRC association, which takes care of the victims of the war. In its operating center in Kyiv, the organization provides complete medical assistance (medical care, psychological and social support) to people affected by the war, focusing on physical and mental support.

In the Southwest of Ukraine, the Longo Mai artisanal and agricultural cooperative also welcomes displaced persons. «During the first months of the war, we mainly helped evacuate, feed and shelter women and children from
the conflict zones,» says Oreste Del Sol, a farmer in the cooperative.

Fondation de France also supports the association Alliance Global, which aims to respond to the needs of displaced persons within the LGBTQ+ communities and their families, in particular by providing emergency accommodation in Lviv, Kyiv and Kharkiv.

A special focus on Human Rights

Fondation de France supports the Collectif Solidarité Ukraine, a project created by several French organizations with local partners. This initiative, which brings together some sixty actors, carries out information activities and organizes events for the public on the human rights situation, in order to educate and mobilize citizens.

In the interests of independence and freedom of information, Fondation de France supports the Press Freedom Center of the NGO Reporters Without Borders in Lviv, which aims to provide Ukrainian journalists with equipment to guarantee their safety in the field (helmets, bullet-proof vests, etc.) and thus enable them to continue reporting on the conflict. 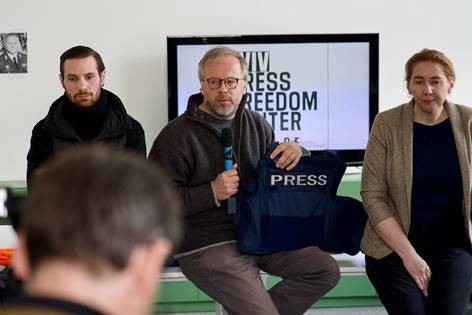 Another major issue is the fight against human trafficking. The association Magnolia, which has been working on this issue for some 20 years and has been recording the disappearances of Ukrainian children, has received support from Fondation de France to maintain its database, coordinate with the police and NGOs and support the affected families.

Fondation de France also supports initiatives in France related to the reception of people who have fled Ukraine, particularly through its Solidarité migrants program: learning the French language, helping people resume their studies, etc. These projects help exiles, regardless of their nationality, to integrate.

Coordinated action on a European scale

Dealing with a crisis of European scope, only a coordinated response can be relevant. Fondation de France is therefore acting within a common dynamic, in partnership with other European organizations that were already active before the war in the territories affected by the conflict. This is an opportunity to rely on professional organizations with a deep knowledge of local actors, while working to strengthen their capacity for action, notably by offering training or
logistical support.

For example, Fondation de France supports the Carpathian Foundation’s offices in Slovakia and Hungary, which have both launched calls for projects in their territories to support associations working with Ukrainian refugees. Fondation de France also participates in two European programs: EPIM, which supports organizations working with migrants and uses part of its funds to protect the most vulnerable refugees, and Civitates, which supports independent journalism and fights against disinformation about the war in Ukraine.

Fondation de France has formed a partnership with the French Development Agency (AFD) to pool resources and expertise in crisis areas.

Within this framework, a major program bringing together French NGOs and Moldovan civil society has been initiated to prevent the pressures that could result from the integration of refugees from Ukraine. Called Stability & Resilience Moldova - SRP Moldava, the project plans to strengthen early childhood, education and employment support services, as well as healthcare services.

→ Solidarity with Ukraine: three months of action
→ More on the operation Solidarity Ukraine