Live and grow old in a community

How to grow old without losing control of one’s life? How to get care, protection and health services without becoming isolated, deprived of one’s free will, one’s liberty, or being excluded from society? Numerous questions surround the issue of old age. For over 50 years, Fondation de France and its donor-advised funds have been active on this subject, supporting innovative ideas to improve living conditions for elderly people. With an overarching theme: respect for individuals and their rights, maintaining independence and social inclusion.

Today, with higher life expectancy and the increased prevalence of new pathologies like Alzheimer’s disease, the issues of longevity and care for the elderly are more important than ever. According to Insee (the French National Institute of Statistics and Economic Studies), the number of French senior citizens losing independence will increase by over 60% by 2050, rising from 2.5 million to 4 million. The shock provoked by the health crisis only adds to this demographic data. The pandemic greatly aggravated elderly people’s social isolation and demonstrated the need to reinvent better housing models that are better adapted than current facilities such as EHPADs, the state-run retirement homes (Établissements d'Hébergement Pour Personnes Âgées Dépendantes).

Fondation de France was fully mobilized and seeking solutions to these issues during the pandemic. For example, it funded a Web-TV produced by health care workers for isolated patients and supported mental health crisis units in EHPADs. However, this commitment is nothing new. One of Fondation de France’s first major causes was the place of older people in our society. In 1975, it launched its first campaign, called “Combating Loneliness in Elderly People,” which was sponsored by Simone Veil, then Minister of Health. Thanks to this campaign, mutual assistance networks were set up, as well as transit services in rural areas and training for health care workers. In 1981, Fondation de France addressed the question of housing for the elderly, including supporting temporary housing and the creation of a retirement center in the Aveyron region. A study entitled “Living Spaces until Death” was a milestone, exploring, among other ideas, the possibility of small housing facilities where elderly people could live until the end of their lives. This study led to a national campaign in 1984. Fondation de France has also worked to create clubs for elderly people, promoted workshops and activities in housing facilities, encouraged innovation in inclusive and intergenerational housing, not to mention its efforts to take care of carers.

With the goal of supporting Alzheimer research and innovation that leads to a more inclusive and supportive society, Fondation de France partnered with Fondation Médéric Alzheimer. In 2018, a major field survey entitled Maladie d’Alzheimer, Pour une Société Plus Inclusive (Alzheimer’s Disease: For a More Inclusive Society) was published, based on the most inspiring European projects dealing with inclusion and people with illnesses.

Beyond the crisis, rethinking the retirement home system

Finding the balance between keeping safe and having a social life is one of today’s great challenges. One of the main questions is housing and care options. “It is clear that the current system is deficient and reaching its limits,” explains Agathe Gestin, head of the Elderly People program at Fondation de France. “By overprotecting, we end up isolating elderly people. Between keeping someone at home at all costs and putting them in an EHPAD, few alternatives exist. So we must innovate, with new housing formats that foster autonomy and social participation in a safe space, but also encourage change in existing collective housing facilities to invent the EHPAD of tomorrow,” she adds.

With the aim of developing new models for living well and growing older surrounded by others, Fondation de France and the donor-advised fund Baboin Jaubert – Générations Solidaires decided to support Habitat et Humanisme, a non-profit that works on innovative intergenerational housing projects all over the country. The concept is to bring together residents of all ages and social conditions (young people, elderly people, single-parent households, etc.) in small apartment buildings, either new or renovated. Projects are already up and running in Arras, Saint-Étienne and Strasbourg. In each, diversity and inclusion are encouraged through shared spaces like mini-childcare centers, and by the presence of a social facilitator who organizes the space’s collective activities. 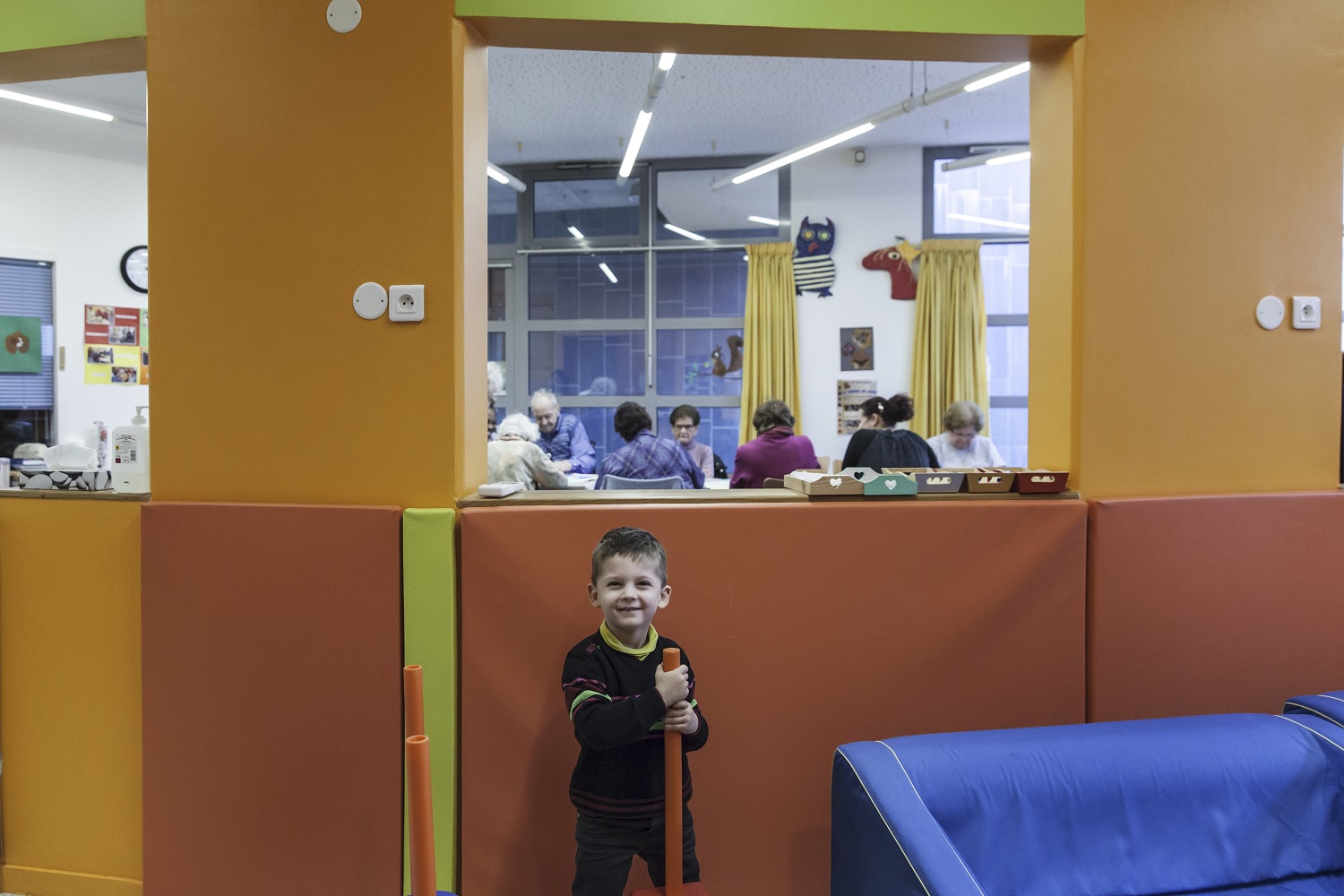 Based on diversity and inclusion, these new forms of intergenerational housing can offer neighborhood services, like day care centers.

Another outstanding project, selected by Fondation de France and supported by the donor-advised fund Fondation Mouravieff-Apostol, is the Maison des Sages (House of the Wise) in Les-Loges-en-Josas (Yvelines department). This retirement home alternative is based on shared housing. A large, 250 square-meter house with a yard, located in the heart of the village and entirely renovated, is home to eight residents, all living with Alzheimer’s disease. While each has their own bedroom and bathroom, they share the rest of the house with the others. Carers and a social coordinator are on hand every day as part of round-the-clock care. A student also lives on the premises, paying reduced rent in exchange for participating in household duties. Everything is organized to encourage interaction, including making meals, small domestic tasks and leisure activities. And each maintains their relationship with their general practitioner and can visit with their family and loved ones as often as they like. For Alexandre Schmitt, co-founder of the Maison des Sages, who hopes to open a similar residence elsewhere in the Yvelines in 2022, this model is the best fit for people who are losing their autonomy.

“People living with Alzheimer’s in France often have no other choice but to leave their homes and move into an EPHAD. However, this standardized kind of facility, with a very ‘social medicine’ atmosphere and often rigid schedules, isn’t adapted to their problems, which require more individualized care, on a human scale and where they can find their bearings. Our model promotes continuity in human relations and involvement in the basic activities of daily life, and the results have been encouraging. We see a real family spirit, with people making friends and helping each other…All of that has a positive impact on their mood. They have more desire to participate in activities, which helps them maintain their cognitive and motor abilities.”

Breaking down barriers and building bridges between generations

“Reversing a tendency to exclude or pigeonhole older adults and recreating cohesion doesn’t happen naturally. It’s a long-term undertaking that takes a new look at advancing age,” emphasizes Agate Gestin. To promote the social inclusion of elderly people, in 1991 Fondation de France and the donor-advised fund JM. Bruneau committed to initiatives that aim to recreate the link between generations. Aside from supporting shared housing and non-profits like Un Toit Parmi les Ages (One Roof for All Ages), they support initiatives that bring young people and the elderly together. For example, workshops on new technologies with the non-profit Aciah. Or daily urban walks with volunteers of all ages and the residents of an EPHAD in a neighborhood in Villeurbanne, thanks to the non-profit Arpavie.

Palamente, a performance-audiovisual troupe, also zoomed in on the idea of doing things together. They brought together 27 senior women and 28 junior high school students in Vitry-sur-Seine (in the Val-de-Marne department) to create a documentary on the theme of gender representation. Focusing on this very hot topic, younger and older women had the opportunity to question their prejudices about the sexes and to confront their vision of masculinity and femininity—with a gap 50 to 70 years! A collective effort, the documentary was screened in cinemas in the Île-de-France region and documentary film festivals. If there are more and more intergenerational projects, success requires a certain expertise. This is what Agathe Gestin learned through experience. “Intergenerational dialogue cannot be decreed; it must be constructed over time. It’s not enough to bring together populations of very different ages for there to be a connection,” she insists. “There must be an equal meeting point where each feels considered for who they are, not for what they are supposed to incarnate. And when that works, there is no longer a question of age, only of individuals contributing to a dialogue.”

Giving older adults their place as a citizen in their own right is essential. Putting people to one side, relegating people due to their advanced age can only have a negative effect on society, its cohesion, its ability to live in harmony and show solidarity. According to Marion Villez, sociologist and member of the expert committee in the Elderly People program at Fondation de France, “In our country there is a negative vision of aging that is a caricature. Aging is socially discredited and perceived as something static. Yet aging is not one thing but many, and it is not something fixed but a complex process. These inevitable representations have engendered a partitioning of the population, with a homogenization of aging populations who are actually very different. This diversity of situations requires multiple, evolving responses, thought out on a local scale.”

Obviously, taking into account seniors’ specific situation and their attachment to a region deserves a thorough understanding of on-the-ground realities. Fondation Crédit Agricole Finistère, for example, supported an artistic documentary project, produced by the K’Elles dance company, who worked with people with Alzheimer’s on a piece about the body and aging. In Paris, in the working-class neighborhoods of Belleville and Goutte d’Or, two solidarity cafés run by the non-profit Ayyem Zamen were created thanks to Fondation de France’s support. These havens of calm and conviviality were developed for a specific community: older immigrants, mostly from North Africa, also called Chibanis. Through this initiative, these communities, often without resources and family support, were finally able to enjoy a space that was theirs, and also open to the neighborhood. “Longevity is not a problem, it offers an opportunity to build a more inclusive society for everyone,” concludes Marion Villez. “Because what we set up in a housing project to ease the life of elderly people often ends up benefiting others.”

→ Alzheimer’s disease: a home where patients can grow old together
→ Discover our program Elderly people