Laurence Fischer: “Receiving philanthropic support made me feel I was understood”

Laurence Fischer is a three-time world karate champion. In 2017, she created Fight for Dignity, a nonprofit that offers adapted karate training to women who have been victims of violence. Since July 2019, she has been sports ambassador for the French Ministry of Foreign Affairs. She explains how she became involved and her vision of philanthropy. 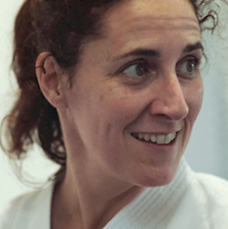 You have been working with NGOs for a long time. Where does this commitment come from?

My commitment is linked to my own experience and the impact that sports has had on my life. I started doing karate when I was 12 without really liking it, because I was very shy and introverted. Then I realized it was an incredible means of expression. I am very grateful to karate for what it has given me: self-awareness and a very direct connection with another person. Having been lucky enough to live in a country where it is easy to do sports, I felt it was my turn to pass on my knowledge, to seek out those who don’t have access. That’s how I became committed to working with NGOs like L’agence Pour L’Éducation Par le Sport (Sports Education Agency), Play International and Premiers de Cordée (Lead Climber).

You created Fight for Dignity in 2017 to help women victims of violence to rebuild their lives, both physically and mentally, through practicing an adapted version of karate. What was the lightbulb moment for you?

I had two decisive experiences. In 2005, I put together a mission with Play International to go to Afghanistan and share my athletic experience with the country’s top young women’s karate team, who were risking their lives to practice. I had them come to France to tell their story. At that moment, I realized that freedom, for a woman, comes at a price that is not the same everywhere in the world.

The second shock was in 2013 during the Global Forum of Francophone Women. While I was there, I met Dr. Mukwege, a gynecologist-obstetrician and director of the Panzi Hospital in Bukavu, in the Democratic Republic of the Congo. He fights against the use of rape as a weapon of war and works to help the survivors get their lives back. He had just escaped an assassination attempt. Armed with my experience in sports education and the fight for gender equality, I made myself available. In 2014 I went to Panzi, to the Maison Dorcas (Dorcas House) where these women and young girls are cared for. It’s a holistic facility that offers assistance with medical, legal and employment issues, among other things. There was music therapy, but nothing for their bodies, which had been traumatized twice – first by the brutality of rape, and then by reconstructive surgery. So, I proposed a karate class adapted for post traumatic stress to put their bodies back into action, and to reconnect their bodies with their mental state. It’s not self-defense, but reconstruction: how to deal with one’s emotions, and to release them. The aim was to recover their self-esteem, to reclaim their wounded bodies, that they now associated with suffering. When I came back to France, I developed the Fight for Dignity project at the Saint Denis Maison des Femmes (Women’s House) for female victims of violence. These women need to be able to break their silence, feel protected, heard, and must get support to rebuild their lives.

This project is receiving support from several philanthropic actors, including Fondation de France, Fondation Raja, Fondation des Femmes, and Fondation L’Oréal. How has philanthropy played an essential role in the fight to stop violence against women?

Receiving philanthropic support to develop Fight for Dignity made me feel understood. It was a recognition of the project’s pertinence, its humanity, of its most fundamental essence. When Fight for Dignity was launched, philanthropy was our sole support, starting with Fondation de France. We had to have a real vision to commit to an issue as taboo as that of a woman’s body. That support made sense, it meant that we were on the right path.

There are some extraordinary projects out there, based on solid expertise, but the problem, which is not limited to sports, is that they aren’t publicized. So they remain micro-projects. This is where philanthropy plays an important role: it identifies promising initiatives and gives them impetus. It guides governments, gives confidence, shows institutions a way forward, saying “we believe in this initiative, so go for it!”

Do you think that in order to scale up a project it’s necessary to combine philanthropic actions with those of government agencies?

Yes, the link between philanthropy and government agencies is essential. There needs to be a synergy between the various actors as well as an institutional commitment for a project to grow and benefit many more people in need. Today, the Ministry of Sports and the government are very proactive regarding the issues of gender equality and the positive impact of sports on society. However, we owe this awareness to philanthropy, which had the foresight to identify and support promising, innovative projects such as ours.

In general, these days you can’t do anything without working together: civil society, philanthropy, government agencies, NGOs, and so on. And so we have made partnerships with French sports federations, for example, to raise awareness about violence against women on a club level. I believe in working together!

Aside from women’s issues, what other priority causes do you think philanthropy should invest in?

Education is a major issue, and sports must be included, the body in movement, just like learning to read and write. That’s a subject that requires more action, clear-cut action.  Education is also social skills. What do we eat? How do we eat? Questions that open up discussion about problems like sedentary lifestyles and psychological difficulties.

Can you think of any initiatives supported through philanthropy that really stand out for you?

Play International, which promotes sports as a means of social change and implements educational and humanitarian projects, is an NGO that I’ve watched grow and transform. Regarding education, it is outstanding, especially through its work in the classroom, where so many issues come into play.

Another project: Caméléon, in the Philippines. It’s a multidisciplinary program designed for young girls who have been victims of pedophiles. They are welcomed, protected and get an introduction to circus arts, with a therapeutic goal. They also get support from mentors. They are offered professional training to encourage their social and economic integration. Some become doctors or teachers…it’s fantastic!

More recently, I discovered the Pour Le Sourire d’Un Enfant, an initiative that offers fencing lessons to street children in Dakar. The non-profit gives them a chance to follow a path towards independence. In fact, they have signed a partnership with the Ministry of Justice. It’s an outstanding project that can be replicated, and that follows the marvelous throughline that is sports.