Since 2015, Fondation de France has been actively engaged in facing terrorist acts and threats, complementing the government’s response. Fondation de France has set itself an important task, in addition to the help provided to victims in the months following the attacks. The idea is to develop critical thinking in young people and to enhance their ability in deciphering news, to help prevent indoctrination and radicalization.

Since 2015, Fondation de France has been actively engaged in facing terrorist acts and threats, complementing the government’s response. Fondation de France has set itself an important task, in addition to the help provided to victims in the months following the attacks.  The idea is to develop critical thinking in young people and to enhance their ability in deciphering news, to help prevent indoctrination and radicalization.

November 13, 2020 marks a tragic anniversary, the attacks in Paris and Saint-Denis, which left 120 people dead and more than 400 injured. These murderous attacks followed those directed against the editorial team of Charlie Hebdo, a satirical magazine, and against  Hypercasher, a kosher store in the east of Paris, killing 17 people. A few months later, on July 14, 2016, a terrorist in a truck plowed into hundreds of people gathered for the Bastille Day celebrations in Nice. 86 people died that evening and 458 were injured.

More than 30 terrorist attacks have been carried out on French soil since 2015, including the recent murder of teacher Samuel Paty and the attack on parishioners of the Notre-Dame Basilica in Nice.

Martin Spitz, “Emergencies” expert at Fondation de France, explains: “In the past five years, our country has had to face a climate of threats. Social cohesion is the reason Fondation de France exists. And yet, in addition to the grim tally of victims, this cohesion is precisely what is being targeted. Terrorism seeks to oppose communities and to stoke fear and isolationism of all kinds. It felt obvious that we should ‘make a stand’ to promote solidarity and reject terror.”

In December 2015,  Fondation de France launched the Give for France program (known in France as the Ensemble face au terrorisme program), to enable French and international donors to make contributions. A total of two million euros was raised to support injured and/or traumatized people in the wake of the attacks in Paris, then Nice. The two main lines of action are: to assist victims and prevent radicalization.

Rapid and lasting action for the victims of terrorism

The life of a victim is turned upside down after a terror attack, with major impact on daily life, work and social interactions. Helping victims build their life again requires swift action: Fondation de France has released emergency funds when a job has been lost, for instance, and provided administrative and social support. It also requires action over the long term, especially to help overcome the trauma experienced. “We now have a better understanding of post-traumatic stress syndrome, in both adults and children, and we know that problems can occur after a long period of repression, generating very severe - and disabling - mental disorders”, says Mélanie Hubault, who heads the Health Promotion and Patient Support programs.

Fondation de France has supported hospital teams who are introducing innovative care protocols for children exposed to terror attacks, as in the Lenval children’s hospital in Nice. It has also assisted victim support groups, such as Life for Paris, 13onze15, and Montjoye in the region of Nice. Thanks to these non-profits, survivors and the families and carers of victims help each other and receive the social, legal and psychological support which is so crucial to rebuilding their lives.

A donor-advised fund for terror victim

The Fondation d'Aide aux victimes du terrorisme (Foundation for the Support of Terror Victims – FAVT) supports projects led by non-profits that assist the French victims of terror events abroad as well as to the victims (all nationalities) of terror events that have taken pace in France. It also acts in the area of prevention, by funding research on the drift toward terrorism and the factors that lead to radicalization and then to direct action, the aim being to target the most effective prevention techniques.

Prevention is the other major aspect of the Give for France program. How can radicalization be avoided, especially in young people?  Tackling disinformation, especially on social media, learning to make up your own mind, engaging in debates and non-violent interactions – these are the objectives of InterClass, a project supported by Fondation de France since 2015. The underlying idea is a simple one: in the fight against fake news, nothing beats getting involved in the actual production of news programs, to understand how information is generated, what it requires and the difficulties that surround the process. French broadcaster France Inter invites middle and high schools students in priority education areas to get involved in the production of news reports in the summer programming schedule. Many projects have been set up –  including writing workshops, speech classes, putting on a theater show and producing videos – all aiming to show how information can be manipulated. The key element throughout is to develop young people’s critical thinking. “Priority is given to middle school students, 11-15 year olds experiencing independence, smartphones, social media and the Internet ... without necessarily being aware of their inner workings and pitfalls,” says Anne Bouvier, who heads the Children and Education program at Fondation de France. In France, awareness of these issues is raised with 500,000 students in 3,000 schools each year.

Work carried out jointly by the Give for France program and the January 11 Fund.

Valentin Ribet was a young lawyer, he was killed during the attack on the Bataclan, a concert venue in Paris. His family created a fund bearing his name, which combats illiteracy and ignorance, by encouraging access to education and culture. “In building stronger communities, promoting interactions and reaching out to others, we are paying tribute to all the victims of terror. We are also taking practical steps for the future,” says foundation president Olivier Ribet. The foundation mostly supports projects that take place in educational and prison settings, such as operation Entre les lignes (Between the Lines) or help for the Fresnes en scène show.

Nicolas Ségal, a young entrepreneur with businesses in the north east of Paris, created the Fondation Avenir d’Enfance (A Future for Children Fund) after the 2015 attacks. He realized that some of the young people in Montreuil were confined to their neighborhood and had never explored Paris, just a few metro stops away. Since then, his fund has supported outings, enabling young people to explore a heritage that belongs to all French citizens. It also offers “philosophy workshops” in primary schools, so that very young children can start to develop discussion skills. 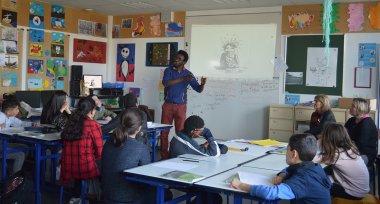 The January 11 Fund, a donor-advised fund at Fondation de France, was set up by a grouping of 10 funds and one company, after the attacks against Charlie Hebdo. It was created for a period of five years and came to an end in January 2020. From the start, it directed its work towards young people and prevention, and some 50 projects were implemented. They included Cartooning for Peace, a non-profit supported from its inception by Fondation de France, which offers teaching packs and regular meetings in educational, extracurricular and prison settings, in order to develop critical thinking. The January 11 Fund also supported podcasts covering grassroots projects, an opportunity to showcase the work, experience and enthusiasm of those who are involved with young people. “These days, given what’s at stake, we know that we need to enhance the expertise,” says Anne Bouvier, who heads the Children and Education program at Fondation de France. “Which is why the Fondation de France Education Program will be taking over from the Fund in 2021, to continue supporting these non-profits working in the field.”